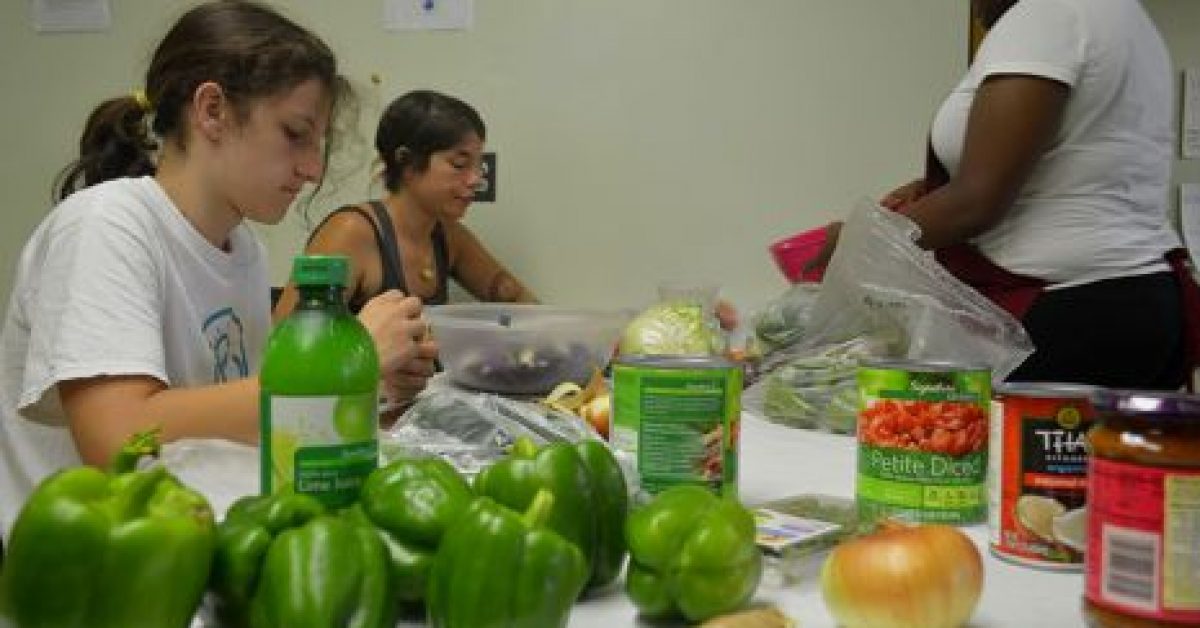 This is part of a series about Mission Thrive Summer, a program of the Institute for Integrative Health and Civic Works’ Real Food Farm that empowers youth with skills and knowledge for a healthy life.

Week five of Mission Thrive Summer culminated in the much-anticipated cooking battle, a half day competition between four teams, the Wolf People, Pandas, Elephants, and Pucks, in which each team’s lunch meal was evaluated by three judges. The winner of the challenge was crowned Top Kitchen Crew and received a special bonus.

Preparation of each dish began in earnest at 9 am. Recipe selection guidelines called for teams to incorporate macronutrients such as carbohydrates, healthy fats, and protein, as well as whole foods into their meals. Teams had just 120 minutes to complete their creations.

“I had never heard of paella before, but it looked good in the cookbook picture so we picked it,” said Wolf People team member Malcolm. Across the room, Keelyand her fellow Ducks were making Thai shrimp noodles with a fruit salad. “We decided we needed a healthy side salad,” she explained in between chopping fresh ginger and watermelon.

As the clock counted down, some team’s activity became more frenzied while others kept their cool. “Our food is good,” said Jonathan, a peer crew leader. “I know my team will come through.”

With 30 minutes to go, teams began plating their food. They placed garnishes of basil grown at Real Food Farm in side salads and sprinkled peanuts on top of dipping sauce. Sue Berman (above right) executive director of the Institute for Integrative Health, watched as teams made their plates picture perfect.

Finally it was time for each team to present their creations to the judges: Myeasha Taylor of Real Food Farm and Baltimore Civic Works; chef Krystal Mack, owner of BLK Sugar and Karma Pop; and Kathleen Goodwin of the Baltimore City Health Department.

Along with visual presentation and taste, teams were graded on creativity, team work, and each member’s oral presentation about their dish’s nutritional properties. Chef Krystal Mack, one of the judges, offered this advice to the students: “Own what you do. Have confidence in yourself and your presentations.”

Judges tasted each dish and quizzed team members about everything from chopping techniques to the contents of vinaigrette. After much deliberation, Team Duck’s chicken and shrimp fajitas dish was declared best in show. In addition to bragging rights, each member of the winning team received a $20 gift card bonus.

When lunch was over, crew leaders presented special handmade awards to each crew member honoring them for their unique contributions to Mission Thrive Summer.