Where People Thrived and Suffered in the U.S. Prior to the Pandemic 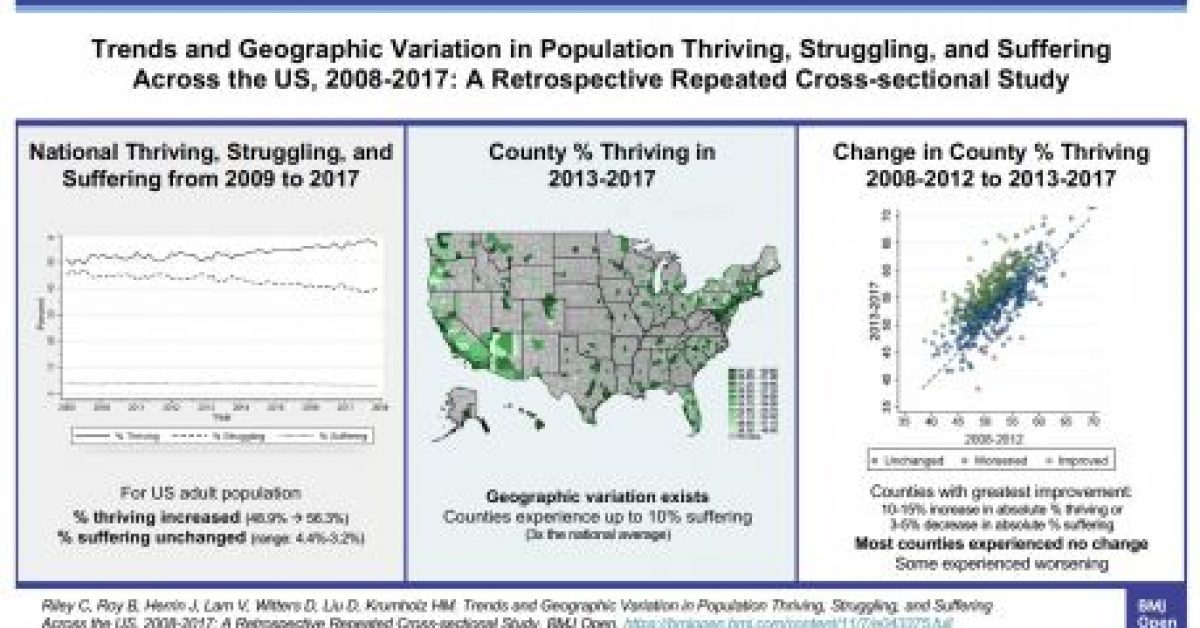 Whether people thrive, struggle, or suffer is shaped by the conditions in which they live, grow, work, and play. Collective well-being is therefore an outcome that can be prioritized, invested in, and improved. To do so, we must know whether—and where—people are thriving, struggling, and suffering.

Our new study, Trends and geographical variation in population thriving, struggling and suffering across the U.S.A., 2008-2017: a retrospective repeated cross-sectional study, uses the largest dataset on wellbeing in the US to identify places that are thriving, struggling, and suffering. We report on national and county level trends in wellbeing as well as county-level variation from 2008 through 2017.

Nationally, the percentage of the U.S. population thriving increased from 2008 to 2017 (48.9% to 56.3%), while the percentage suffering remained unchanged (ranging 4.4% to 3.2%). While the increase in thriving is good news overall, there was still considerable room for improvement as well as marked geographic variation at the county level. Up to ten percent of some counties’ population was suffering—that’s three times the national average. While most counties experienced no change in the percentage thriving and suffering over this decade, some improved as much as ten to fifteen percent in thriving and three to five percent in suffering.

To move populations from struggling and suffering to thriving, we need to create places that foster high well-being for every individual. Our study reveals many areas in which people were thriving and in which thriving increased over time. These areas of greater thriving may be places from which we could learn – and places in which we could further improve. Conversely, our study also showed areas in which people were not thriving or did not increase the percentage thriving over ten years, even prior to the onset of the pandemic. These areas may be places we could intervene to create communities, systems, and contexts in which every person has the opportunity to flourish—and in which we can collectively thrive.

Carley Riley, MD, MPP, MHS is Assistant Professor in the Department of Pediatrics at University of Cincinnati College of Medicine and Co-Faculty Lead of Population and Community Health at Cincinnati Children’s Hospital