Why I Support the Green Road Project

A product of the 1950’s and 60’s, I grew up with the idyllic world of Leave it to Beaver, Father Knows Best, Gunsmoke, and Bonanza on TV. My young posse and I loved to run around with toy six shooters and tommy guns, perfecting the dramatic ways we could get shot, complete with the sound effects of dying. To us, it was just fun and games.

As our country’s involvement in Vietnam escalated in the 60’s, my older neighbors went off to Southeast Asia, and the world as we knew it began to crumble. Dave, Mark, and Ronnie came back and seemed ok. Butchie, who stepped on a landmine, was in the hospital for months. When Bruce returned, nothing seemed right. He was consumed by anger that couldn’t be extinguished.

Throughout high school, we were a pretty hawkish bunch, encouraged by the notion that we were stopping the insidious spread of communism. All that started to change for me one evening when I was a U.S. Army Cadet guarding the ROTC building. I watched my fellow students marching past, chanting anti-war slogans, and singing anti-war songs.

I began to investigate the realities of war and realized how much they affected everyone. I wondered: What was worth the price of creating such an angry society?

Then, my neighbor Bruce hung himself so he no longer had to hear the sound effects of dying. My feelings of emptiness and confusion have lasted ever since.

About a year ago, I met Dr. Fred Foote and the Institute for Integrative Health and learned about the Green Road Project for Wounded Warriors. Listening to Fred deeply affected me. I couldn’t help my friends, family and neighbors from the past, but I could help to provide a healing environment for our returning heroes.

That’s why I support the Green Road Project. I hope you’ll join me. 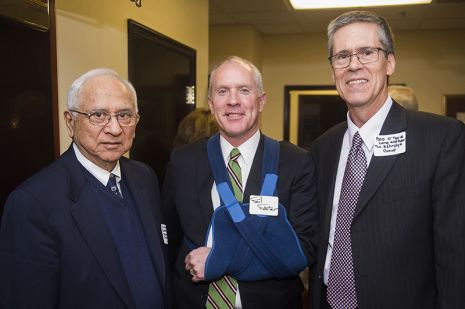 To raise funds for the Green Road Project, Bob O’Toole (right) of the Estridge Group of Long & Foster hosted an event at the company’s Bethesda offices in January. Also pictured are the Honorable Everett Alvarez, Jr. (left), a steering committee member of the Campaign for the Green Road Project, and Paul Foster (center), Senior Regional Vice President, Long & Foster.[/caption]